A Rollercoaster of Fun!

Some of my favorite games being Machinarium and Botanicula, both from the acclaimed studio Amanita Design, it’s no wonder I was super excited for their latest progeny – Chuchel (meaning – dust bunny). Amanita is an independent studio, which allows them great liberties in their games, such as crazy characters, weird story-lines, hilarious Easter eggs and beautiful artwork. They are based in Czech Republic, which explains the weird ramblings of their characters (No offense – fellow Slavic here), and once again, the amazing Czech band DVA composed the weirdly psychedelic musical score.

After several amazing games the expectations were high – but Chuchel delivered, and I can honestly say it’s worth each cent. This is the funniest game I ever played! I was constantly laughing or giggling, and at one moment both me and my boyfriend were crying – literally. The game isn’t funny in the conventional sense, there are no jokes, but everything is so ridiculous and absurd, including characters, their actions, noises they make, silly little explanation clouds, and the animated sequences. It’s impossible to contain yourself while playing it!

You play as a funny black creature called Chuchel, and the thing you prize the most in this bizarre colorful world is a huge red cherry – which constantly gets stolen. During the course of the game, you are on a quest to retrieve that cherry, but it seems everyone is out to get you.

What I spied right away is that this game isn’t linear like their previous games, instead, Chuchel is a series of gags – multiple short scenes where you solve puzzles to retrieve the cherry and then lose it again at the end. Several characters constantly stand in your way – a weird pink armadillo-like creature, Kekel, which is super annoying and reminiscent of the squirrel from Ice Age in its obsession; other characters in the game (many weird creatures); and annoying huge black hand which just swoops down on the screen from time to time whenever it looks like you’ve finally got that freaking cherry, and plucks it away from you.

Solving the puzzles is not always easy — you have to use logic, arcade skills, stealth, and when all else fails and the solution seems impossible — a question mark hint appears, and then you realize the solution is even more ridiculous, and you giggle some more. 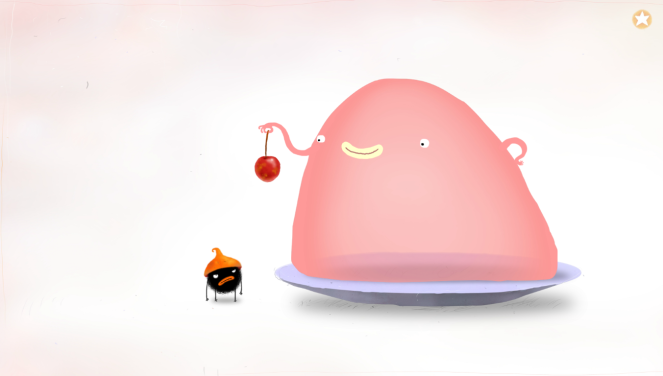 The game is pretty short, but not if you explore every possibility – try to find the logical solution to the puzzle, and then do the other solutions first! You will be rewarded with something utterly weird for sure – Chuchel being flattened or stomped upon in every possible way; a hilarious or even creepy animated sequence; an Easter egg – the possibilities are many.

The bottom line is: in the 4,5 hours I spent playing this game I had more fun than I had in ages, so if you’re looking for a casual game that will make you laugh – this is it!

Do you like to play casual indie games? Which ones are your favorites? Let me know in the comments section! 🙂