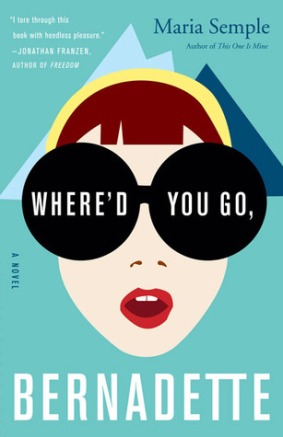 “People like you must create. If you don’t create, Bernadette, you will become a menace to society.”

When her daughter Bee claims a family trip to Antarctica as a reward for perfect grades, Bernadette, a fiercely intelligent shut-in, throws herself into preparations for the trip. But worn down by years of trying to live the Seattle life she never wanted, Ms. Fox is on the brink of a meltdown. And after a school fundraiser goes disastrously awry at her hands, she disappears, leaving her family to pick up the pieces–which is exactly what Bee does, weaving together an elaborate web of emails, invoices, and school memos that reveals a secret past Bernadette has been hiding for decades. Where’d You Go Bernadette is an ingenious and unabashedly entertaining novel about a family coming to terms with who they are and the power of a daughter’s love for her mother.

I don’t usually read contemporary fiction, because my favorite genre is obviously fantasy, but from time to time I love stepping out of my comfort zone and trying something new. So, when Hana @ Lady Bibliotaph asked to buddy read Where’d You Go, Bernadette with me, I was ready for a challenge! The second challenge here was rating this novel, but more about that later.

So, Bernadette is a weird novel. I’d say quirky, but I usually connect quirky with positive, and Bernadette is not entirely positive. Let’s say it starts off all quirky and fun and then it descends into madness. The plot, obviously, revolves around the main character, Bernadette Fox. She is a suburban wife and mother, not giving 2 cents about other annoying moms from her daughter’s school, one of which is her first neighbor. She gets into constant awkward situations with these women, who openly dislike her because of her unconventional parenting, and, well, lifestyle. Unconventional is putting it mildly – she named her daughter Balakrishna, or Bee for short. Bernadette is a free-spirited creative, and speaking from my personal experience, the worst possible thing you can do to this kind of person is putting her on a leash, or a deadline, or trying to shape her into a Stepford wife kind of mold. And that’s what everyone around her seems to do.

See, Bernadette is a celebrated architect. She left that life in order to raise her daughter with her husband, Elgie, but you can’t just change who you essentially are. If you are a creative person, and you suddenly stop creating, the need to create something will eat you alive. So that is the mood Bernadette found herself in, in the midst of her husband’s success at Microsoft, where he’s the head of the team creating an AI robot; annoying moms talking behind her back, with their leader, Audrey, living next door to Bernadette and doing her best to make her life miserable; and the upcoming family trip to Antarctica – a reward for Bee’s good grades.

“You want to know the coolest part?” Mom chimed in. “There isn’t assigned seating at the dinning room, and they have tables for four. That means the three of us can sit down and if we pile the extra chair with our gloves and hats, nobody can sit with us!”
Dad and I looked a each other, like, Is she joking?
“And penguins,” Mom quickly added. “I’m wildly excited about all those penguins.”

Bernadette is, as I understood, an introvert and suffers from anxiety, so she tries to cope with this overwhelming situation the best way she knows – running away from everything. She hires a freelance personal assistant from India to do literally everything for her, but when that assistant turns out to be a scammer, on top of Audrey wildly snapping at her, and Elgie misinterpreting her overwhelmness as psychotic behavior, and trying to get her committed – Bernadette disappears.

That’s where the quirkiness ends. Be it fiction or not, I just couldn’t cope with the amount of misunderstanding this woman got from everyone, including her husband. His behavior during this is atrocious, and it would be perfectly explained if he’s a villain, but he’s not. Bernadette is a woman crying for help, but instead of getting any, she’s literally forced to abandon her entire family to get away from everything. Except the brief psychotic delusion conundrum, mental health, or illness, isn’t ever addressed. And Bernadette is obviously suffering from something. Adding to that, I thought the ending was a mess, and I didn’t quite like it.

“Just last night, I woke up to pee. I was half asleep, with no concept of myself, a blank, and then the data started reloading – Bernadette Fox – Twenty Mile House destroyed – I deserved it – I’m a failure. Failure has got its teeth in me, and it won’t stop shaking.”

The thing that redeemed this mess of a book, for me, was Bernadette herself. I found myself in everything she did and said, and I can clearly imagine being the type of parent she is, if I ever am one. She’s totally off the rails, yet she’s overwhelmingly positive and loving, and people just need to give her a break. As I said, if you’re creative – you need to create, otherwise you’ll turn into a person you don’t even recognize, and when spiraling out, there’s only one way you can take, and unfortunately it’s down. This is why I had such a hard time rating this novel – I loved Bernadette, but I hated many of the characters and their actions towards her, except Bee, who is precious. So by giving it 3 stars I’m saying I like it, it has issues, but Bernadette still became one of my favorite characters ever.

Maria Semple is the author of the novels Today Will Be Different (2016), Where’d You Go, Bernadette (2012) and This One is Mine (2008), all published by Little, Brown and Co. Before writing fiction, she wrote for the TV shows 90210, Mad About You, Arrested Development and others. Where’d You Go, Bernadette was short-listed for the Women’s Prize and received the Alex Award from the American Library Association. It’s been made into a film starring Cate Blanchett, Kristen Wiig and Billy Crudup.

I’m Marina, 28, from Serbia. I love to read and review magical books. I also love to draw, cook/eat and play video games.