As promised, yesterday I started a Locke & Key readathon in anticipation of the Netflix show coming on February 7th. I’m reading one novel per day, finishing on the 6th, just before the series! This is a re-read, as I’ve read these novels two years ago, but I only did reviews for the first two volumes, Welcome to Lovecraft and Head Games. So for those two, I’m going to do a quick recap, and talk about what I expect from the Netflix series, and I’ll do regular reviews for the rest. 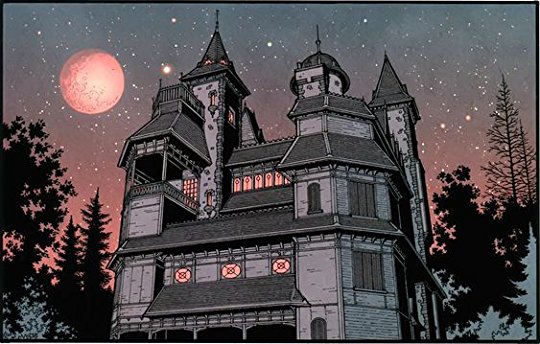 Welcome to Lovecraft is the first volume, which introduces the Locke family: Rendell, Nina, and their three kids: Tyler (Ty), Kinsey, and Bode. After a horrible attack, the kids lose their father and all of them, including Nina, are beyond damaged by this event. The family is taken in by Rendell’s brother, Duncan, into the Locke family ancestral home – the imposing manor Keyhouse in Lovecraft, Massachusetts. Here they try to recuperate but danger wait at every corner. Sam Lesser, Rendell’s murderer escapes the prison, and curious Bode finds a disturbing lady in the estate’s well house, and a mysterious skull key. Bode soon discovers that if you open the main door with that key and exit through it, your soul leaves your body, and you can wander around like a ghost. The well house lady is also interested in some keys, specifically requesting of Bode a key to the black door, and Sam Lesser is willing to do unspeakable things for the keys too. This is where it all begins.

I’m very interested how the show will portray the Ghost key effects and the transition to a soul/ghost. There will be CGI involved for sure, but hopefully it remains close to the comics as possible. The chosen cast looks promising, but I’m pretty skeptical about the girl they chose for the well house lady, as this character will do a fair of amount of gender swapping. The girl does look a lot like the evil lady, but I wonder how she’ll do as a teenage boy. I also don’t see an actor for the uncle, Duncan, hopefully they don’t cut him out. 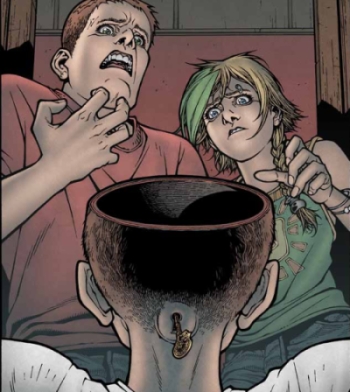 Head Games is the second volume, and here the story about the keys becomes to unravel, as well as the story of the main antagonist, Dodge/the well house lady. Young Bode is the only one in the family who’s discovered the power of the keys, and now he wants to share the secret with his older siblings. This may not be a good idea, as Ty chooses to share the secret further to impress a girl, and a mysterious new friend, Zach. The key Bode found is a Head key, and it can literally open your head. From there, you can temper with memories, feelings and put stuff in to learn new things. The troubles start when Kinsey decides to remove something – her sorrow and fear. This leads to an incident where she puts her new friends in danger, but also discovers something in the caves behind the Lovecraft estate – a mysterious, and locked, black door. This is also where the past events come in to play, and we find out that Dodge was Rendell’s best friend, and that Rendell did everything he could to protect the keys from him.

From the trailers and promo photos it is apparent that the first season of Locke & Key will either cover the first two volumes, or that it will just include the Head key. From what I could gather, the scenes with this key in use are done in a totally different way – instead of opening the top of one’s head and peering into it, they’ve chosen to show it as entering a room filled with memories. This could turn out better than in the comics, or in could very well look like something from Inside Out. We’ll see. I understand why they’d choose to combine the first two volumes into one season, mainly to show a wider array of keys and powers the Keyhouse possesses, but this unfortunately means fewer seasons, as there are only six volumes of this terrific graphic novel.

If you’re interested in a perfect blend of fantasy, horror and mystery, and if you love graphic novels, you should definitely check out the first two volumes of Locke & Key before the show starts on the 7th! If not, I’m sure all will be explained in the series, but as we know, it’s always better to read the book first, and since these are comics, they read fast! See you tomorrow for the review of volume 3: Crown of Shadows.

Joe Hill is the #1 New York Times bestselling author of The Fireman and Heart-Shaped Box. His second novel, Horns, was made into a feature film starring Daniel Radcliffe; his third, NOS4A2, is adapted as a TV series from AMC. His book of short stories, 20th Century Ghosts, won the Bram Stoker Award and British Fantasy Award for Best Collection. He earned the Eisner Award for Best Writer for his long-running comic book series, Locke & Key, featuring the eye-popping art of Gabriel Rodriguez.

Gabriel Rodríguez Pérez is a Chilean comic book artist and architect, known for his work on the horror series Locke & Key which earned Rodríguez his first Eisner Awards nomination. He also did the artwork for Subterranean Press’s edition of Joe Hill’s NOS4A2. Rodríguez was commissioned by DC to draw Adventures of Superman (2013) and IDW’s Little Nemo, Return to Slumberland, which earned him another Eisner Awards nomination.